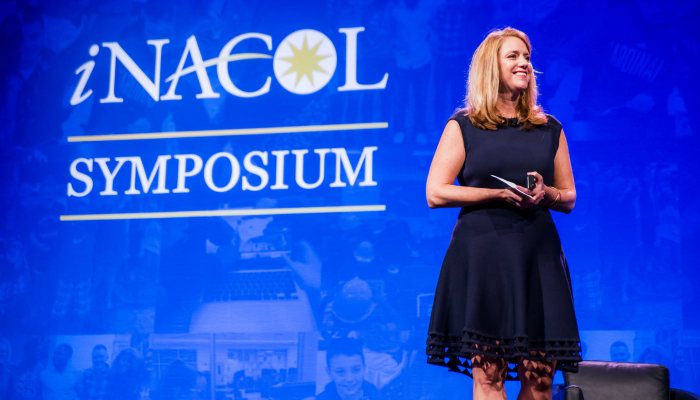 Diane Tavenner, CEO and Co-Founder of Summit Public Schools, delivering her keynote address at the 2017 iNACOL Symposium in Orlando, Florida.

This post originally appeared on the Summit Learning Blog, which my team launched and managed when I served as Director of Content Strategy at Summit Public Schools.

As a child, Summit Public Schools co-founder and CEO Diane Tavenner knew what it felt like to be afraid and vulnerable, to lack the support she needed to succeed in school. In her keynote to the 3,000 attendees of the iNACOL Symposium 2017 in Orlando, Florida, Tavenner shared her vision for education and its roots in her personal experience.

“When I was in third grade, one day my teacher called me out of class,” Diane says, opening her talk with a memory. Arms crossed, towering in platform shoes and Jordache jeans her teacher told her, “Diane, you’re unfocused. You’re not paying attention, and you’re not doing what you’re supposed to be doing. You’re lazy. You’re not turning in your assignments, and you’re not doing your work. You’re not clean; you haven’t bathed. And if you don’t change your behaviors, your future isn’t very bright.”

Tavenner recalls, “What she didn’t know that day was that earlier that week, my parents had gotten in another fight, and this one was bad. My mom was hurt, and the police had taken my dad away, and unlike the times before, he hadn’t returned the next morning.” She continues, “What she didn’t know was I was afraid. I was afraid to take my clothes off and get in the bath, because I felt vulnerable. And I was afraid that if I closed my eyes and went to sleep, that he’d come home and I’d be caught off-guard.”

Tavenner’s story is heartbreaking, not only because she had to bear that experience at such a young age, but that millions of children across the country deal with insecurities out of their control every single day. Hers is, unfortunately, not an experience that is uncommon. To see Tavenner share her story on the stage is to hear a voice speak to the experiences of those of the most vulnerable students in America.

Her story — and the story of millions — is why we do what we do. “I believe that schools should equip every child to live a fulfilled life,” Tavenner opened her speech, later saying, “If we aren’t clear on the purpose of education, there’s no way we’ll get the how right.”

The Power of Love and Community in Education 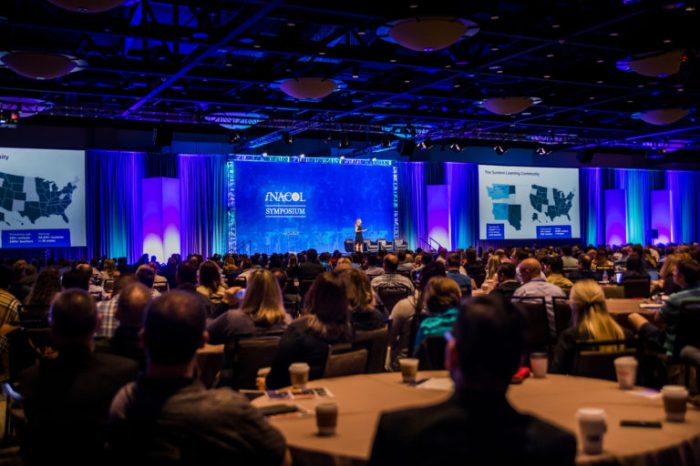 Diane Tavenner, CEO and Co-Founder of Summit Public Schools delivers her keynote address at the 2017 iNACOL Symposium. The Symposium started in 2004 with 400 registrants. This year, more than 3,000 attended.

The overarching message of Tavenner’s iNACOL talk was one of love. She discussed the community of more than 330 schools, 54,000 students, and 2,400 teachers that are a part of the growing Summit Learning Program, a free program that gives schools the tools and resources to implement and tailor Summit Learning — Summit’s personalized approach to teaching and learning — for their communities.

Tavenner speaks to the power of community, “We’ve brought together phenomenal educators — a room almost this big of them — together with a field of incredible learning scientists and a world-class engineering team to design and create and build on the edge of what we collectively know,” she says, going on to discuss how the community has a vibrant virtual presence, sharing resources and best practices in a closed Facebook Group among other places.

Tavenner recalls a particularly powerful coalescence of support this August around Hurricane Harvey, which devastated the Houston area, where 10 Summit Learning schools are located. After a teacher posted a call for help, the community leaped into action.

“Before I knew it,” Tavenner says, “there was a GoFundMe campaign organized and t-shirts, and we were raising money and sending supplies and resources to the [Houston area] community.”

“What I know, as a child who grew up in fear, is the power of when someone who doesn’t have to offers a hand and gives support. And so, what I can imagine this felt like is love.”
— Diane Tavenner
Co-Founder and CEO, Summit Public Schools

Tavenner continues: “Isn’t it funny we don’t talk about love in the work that we do? Because isn’t love really knowing someone? And when you love, don’t you want the very best for them? And at the end, don’t you really want them to live a good life — a life filled with purpose, a life with financial secure, with a strong community, and good relationships, and physical health?”

“And so I wonder, why don’t we talk about love? We know what it takes to create a good life. The only question left for me is: Do we have the commitment and conviction and love of our kids to come together and create the schools that will enable them to live a good life?”

As Tavenner closed her keynote, it’s certain that teachers and principals in the audience who deal with stories like hers every day couldn’t help but wonder: Had third-grade Diane felt some of that love she talked about on stage. Maybe another teacher reached out to her and helped keep her stay afloat as her parents’ relationship degraded? Or a friend boosted her spirits that day? And if not, how many kids across America find themselves in those shoes today, struggling at home, without a lifeline at school?

What was left for the room to ponder was the idea that a little love can go a long way. Tavenner and a group of parents set a powerful mission 15 years ago when they founded Summit Public Schools. Today, Summit is held together by the belief that it is possible and necessary to prepare every student to lead a fulfilled life. It is clear that Tavenner not only believes every student deserves that reality, but also the love it takes to realize that vision.