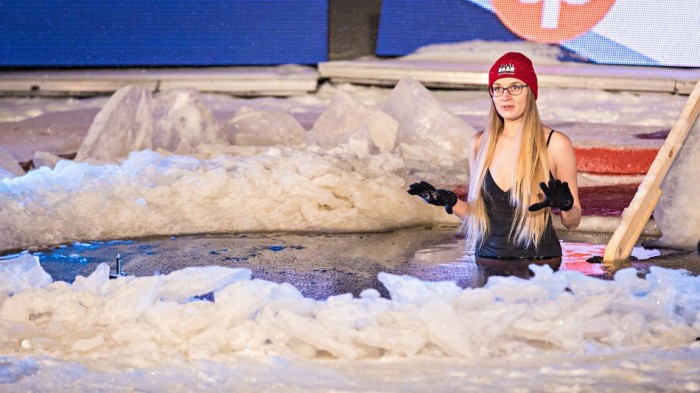 This post originally appeared on Mashable, where I write about technology startups and the entrepreneurial ecosystem.

Polar Bear Pitching, it’s called, is perhaps the most extreme form of startup pitch competitions. Participants withstand snow, ice, and sub-zero temperatures for an opportunity to win €10,000, among other prizes. There is no time limit, but there is one catch: Entrepreneurs must stand in waist-deep water in the frozen Baltic Sea for the duration of their pitches. Talk about motivation to keep it short.

This week, entrepreneurs from eight countries made their ways to Oulu, Finland, home of Polar Bear Pitching. For those unable to bundle up and watch live, the event was broadcast locally and livestreamed worldwide for viewers everywhere.

Thirty participating teams hailed from Estonia, Finland, France, Ireland, Latvia, Norway, Russia, and Vietnam. Each went through an application process, wherein six teams were shortlisted as finalists by an investor jury. All other admitted teams that did not make the shortlist pitched in semi-finals on February 6, with six additional teams moving forward to compete alongside the shortlisted startups in finals the following day.

Pitches were judged by a panel of Finnish and international investors from DFJ Dragon Fund, 01 Ventures, and Icebreaker VC, among others.

Grand prize winner Tatsiana Zaretskaya, co-founder and CEO of Artisun, says she diligently prepared her pitch leading up to the competition, but did not prepare for the mind-shivering physical challenge of standing in ice water.

“Semi-finals was my first time to go into the ice water,” Zaretskaya says. “I thought it would be much worse. Yesterday [at semi-finals] it went very easily, but today [at finals], I was very stressed. My heart rate was reading 170 beats per minute.”

Zaretskaya was presented with a €10,000 check, and she — as well as winners from Cast Print and Cotio — also won a trip to Nanjing, billed as the “Silicon Valley of China,” and a serving plate by Finnish home goods brand Nikama. Zaretskaya was also awarded a Finnish-crafted longboard by Jalla Board.

To date, Artisun has indexed data for optimally growing three types of plants. The €10,000 prize money will be put to good use, researching optimal conditions for more plants, Zaretskaya says. In the coming year, the company will also invest in creating personal kits and testing with large U.S.-based greenhouses.

Polar Bear Pitching Founder Mia Kemppaala says the idea came to her at the end of 2013, after Finland witnessed the rapid downfall of its largest employer and technology giant, Nokia, once the largest smartphone manufacturer in the world. The company cut thousands of jobs, eventually selling its mobile business to Microsoft for $7.2 billion, only to see that division shut down in 2014.

Nokia’s plight put a damper on Finnish morale. “We were in an ice hole,” says Kemppaala. What made it worse was that local engineers, though hungry to innovate, had an issue cutting out technical jargon and explaining their ideas to average consumers. Seeing the economic impact in Oulu — where one of three Finnish Nokia factories was hit hard — inspired Kemppaala to think of a way to help entrepreneurs market themselves and attract investment, all with local flair.

That’s when the concept of Polar Bear Pitching blossomed. “What if we put startup founders in an ice hole?” Kemppaala thought at the time. “They would become better presenters and be forced to get to the point!”

The idea is remarkably local in concept. Finland is the birthplace of ice swimming, a hobby popular among those looking for a post-swim energy boost. Finland, too, is one of the coldest countries in the world — a winter wonderland in February, when the now annual Polar Bear Pitching event takes place.

Most of the pitches this year were under two minutes in length — try getting consistent concision like that on a warm, inviting stage!

The record for longest pitch is four minutes, 53 seconds.

A Cool Way to Heat Up the Market

Participants, investors, and organizers alike agree that Polar Bear Pitching is a great place to start a snowball effect towards investment.

“It’s very democratic,” says investor and entrepreneur Riku Asikainen — one of the co-founders of the Finnish Business Angel Network, which invested €53 million in 324 startups in 2016. He has been a returning judge with Polar Bear Pitching since year one. “Any business conference would benefit from having people talking from an ice hole only,” he laughs. “It keeps the discussions concise and honest. I love the concept.”

As to the investment potential of the startups presented, Asikainen weighs in. “No investor is going to write a check right away, but a good pitch is the first step,” he says. “All of the investors liked the winning startup [Artisun] today, for example. That’s the best thing you can do at a pitching event: Get me excited and make me want to hear more.”

The first Polar Bear Pitching event took place in February 2014 with 30 startups — the winning pitch was delivered by co-founder, then-CEO, and present-day board member Tommi Uhari of Finnish-based global connectivity company Uros. Founded in 2011, the company now boasts eight international offices and its mobile services are available in more than 100 countries. In 2016, it increased revenues from €3.5 million to €43 million. Not bad for pitching in an ice hole just two years prior.

Other startups that have received funding from investors as a result of Polar Bear Pitching include London-based personalized finance news startup CityFALCON and Finnish positioning platform Proximi.io.

“Investors who ended up investing in us were sitting in the audience,” Proximi.io Founder Annina Koskiola says. “Plunging into the freezing water and talking face-to-face with them showed the investors how serious we were.”

Next year’s Polar Bear Pitching event is scheduled for February 27-28, 2019. Until then, Finland has one more crazy pitch competition idea coming up: Ski Lift Pitch, where founders pitch their ideas to investors in a ski lift. Also home of the Air Guitar World Championship, who knows what crazy competition this country will come up with next?