Last year, I made a career switch to education, joining Noble Impact, because education has had a profound impact on me as a first-generation college student.

With my new role, I’ve taken on an immense amount of learning opportunities including attending dozens of educators summit and professional development events; hosting student programming with the team; and conducting research both at a sector level and within Noble Impact’s own initiatives.

Being a newbie in education, this year was my first time to attend SXSWedu, one of the most well-reputed and fastest-growing education conferences in the nation. Though I had attended its predecessor, SXSW, a series of Music, Film, and Interactive festivals, edu was a whole new beast for me. I have to say, I’m quite pleased with the experience. As I transition to SXSW, which starts the day after SXSWedu ends, I’ll be ruminating on the key takeaways SXSW’s education-obsessed cousin event invoked in me around diversity, professional development, and technology.

Educators Have Meaningful Discourse About Diversity

Education equity was such a present topic at SXSWedu that it slightly derailed, but also enhanced (in the end), this panel about teacher voice.

All over the web and in the news, I’m continually appalled by the amount of racist, sexist, classist, and generally offensive and ignorant behavior that goes on in America. In the past months alone, multiple peaceful protesters were attacked at political rallies, Asian children were mocked on the Oscars’ stage, and Navajo beliefs were written into Harry Potter plots, much to the dismay of many Native American communities.

Just today in Little Rock, a “Black Lives Matter” t-shirt was pulled from the gift shop at the Mosaic Templars Cultural Center, a museum about African American history and culture in Arkansas, reportedly because “being a state agency, the museum must represent all Arkansans.” Interesting, because the last time I checked, the mission of the center was to “collect, preserve, interpret and celebrate Arkansas’s African American history, culture, and community from 1870 to the present, and to inform and educate the public about African American’s achievements – especially in business, politics, and the arts.” The Mosaic does an exceptional job of that… when it’s not being censored, apparently.

All over the place, I hear people insisting that these injustices, based on skin tones, sexual preferences, economic background, don’t exist. At SXSWedu, though, it was a topic that came up in nearly every session I attended, whether it was the focus or not.

I have an inkling of a hypothesis that educators — who spend time every day in classroom, where a projected 51.5% of K-12 students are non-white, a majority for the first school year in American history — might be the group of people who are talking most about diversity and inclusion within their industry. I don’t have those stats, but my experience at SXSWedu at least was that it was a topic atop many people’s minds. It’s an ongoing theme I’ve seen at other conferences and events, too, which surprised me, because it sometimes feels like most of America is oblivious to the inequity that still exists in our country.

Teacher Training Can Be Awesome 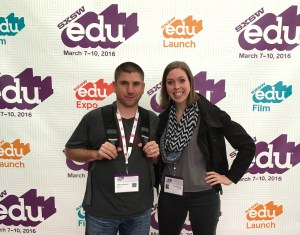 Noble Impact co-founder Chad Williamson and I stormed SXSWedu to learn all the best that’s going on in education.

Only 29% of teachers are satisfied with current professional development (endearingly called PD, I’ve learned). That’s a stat I picked up from a SXSWedu session focused on redesigning teacher PD.

We often talk a lot about redesigning the student experience: Flipping the classroom, personalizing curriculum, implementing project-based learning. But what about teachers? They’re humans, too! And sitting in a conference hall for 8 hours straight, listening to lectures, is certainly not anyone’s idea of fun.

SXSWedu itself proved to me that ongoing teacher PD can be fun and engaging. This is one of only a few teacher training events I’ve attended in the past year, where I’ve legitimately had fun. There were all types of sessions — panels, team-based workshops, 15-minute talks, solution-driven summits. The only thing I’d add is more students… we talk about student voice, but there was a major lack of it, which is chronic across all PD and educator’s events. If we’re serving students, let’s have them there to contribute thoughts and ideas!

This summer, I should note, Noble Impact is launching its own inaugural educator’s professional development summit, and we hope to build it around the things we believe to be important in the classroom… Stay tuned for more! And in the meantime, try to spice up any PD you go to by suggesting some SXSWedu-style engagement!

Technology Is A Means, Not An End

Even a panel about teachers on YouTube wasn’t about technology in the end!

Lastly, but not least, I was pleasantly surprised that though SXSW-organized events are focused on innovation, most of the conversation at SXSWedu was not explicitly about technology. The two — innovation and technology — are often lumped together. But not at SXSWedu.

Even at panels in which I expected the focus to be around the wonders of technology and the Internet, such as the one about top educators on YouTube, the session content was focused on solving educational problems.

In the technology and media sectors, where I hail from, we often get caught up with the latest technologies for technology’s sake: “Oh my gosh, I can get notifications on my wrist with this watch! Holy moly, I can send a message and it disappears after reading? YAS. Wait, I can put on these goggles and feel like I’m across the world? Neat!” Ok, they’re all fun ideas, but are we utilizing them to solve problems? Or just dilly-dally our lives away?

I didn’t see a sense of technology ogling much at SXSWedu, except maybe among some of the technology providers. Educators, though, get straight to the point: How am I going to use this in my classroom? How does it enhance my students’ experiences? What are the key educational outcomes? Now, that’s some pragmatism I can get behind.

Were You At SXSWedu?

What about you? Did you attend SXSWedu 2016? If so, tweet me your thoughts on what you found interesting: @ericaswallow. Until next year!

One thought on “SXSWedu Takeaways From An Education Newbie”