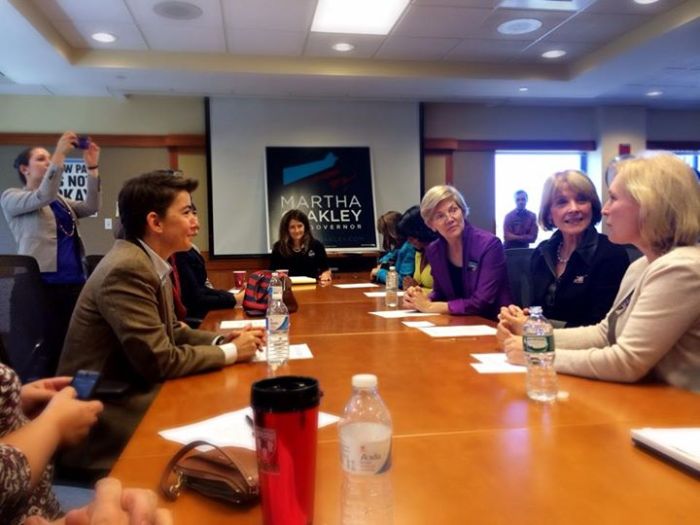 Above: MA Attorney General Martha Coakley, alongside U.S. Senators Elizabeth Warren and Kirsten Gillibrand at a Women’s Leadership Council roundtable held on September 14, 2014, at which I was honored to be a guest.

In her campaign for Massachusetts governor, Attorney General Martha Coakley is — as of late — being criticized for giving ambiguous answers as to her views on important issues, including a graduated income tax, increasing the Earned Income Tax Credit, and granting drivers’ licenses to illegal immigrants. Her recent Democratic gubernatorial nomination over State Treasurer Steve Grossman, instead of being hailed as a victory was seen as a “showing that raises doubts,” by more than one political analyst, about her ability to run a state. Over at The Boston Globe columnist Scot Lehigh put it:

“Coakley ran a vague values campaign, talking a good deal about what she had done as attorney general, but far less about what she would do as governor. Light on specifics and hyper-cautious in her comments, the front-runner largely confined herself to broad themes and a general discussion of areas where she hoped to expand state services. Queried on specifics issues, her predictable answer was that she would ‘look at’ or ‘consider’ this matter or that.”

Having recently attended Coakley’s September 14th Women’s Leadership Council roundtable in Dorchester, I’ll be the first to say I approached this news with a skeptical eye. While Attorney General Coakley may have answers some of the tough questions in the primary with caution, I believe that she’ll take this new criticism seriously and not only step up her transparency game, but also get down to the nitty gritty.

As her background is in law, though, it should be fully expected that she has a risk-averse nature to making brash decisions. I, for one, am intrigued by her “let’s-review-it-first approach,” as long as those reviews turn into thoughtful strategies for a better future.

Having spoken with Coakley in an intimate, though brief, conversation with two others after last week’s roundtable on earned sick time, I was able to see her decisiveness in action. I thanked her for inviting me and gave her the feedback that the Women’s Leadership Council may find greater movement by including working out a more balanced male/female ratio. Incorporating more diverse opinions and getting buy-in from the current male majority in politics and business could be the tipping point, I said.

Without skipping a beat, Coakley responded, “I believe it’s important to first gather women to give them a comfortable space for sharing and speaking.” She went on to discuss her time in law and how the male-dominated culture, while now slightly better, still hadn’t dissipated and was still being echoed in other industries today. I agreed, but countered that we’ve been gathering in mostly-women groups to discuss women’s rights for decades and that it seemed about time for the conversation to be more balanced between the genders. “It’s all about finding the right male advocates early on,” I suggested. The conversation came to an amicable stop, due to time constraints, but I walked away feeling that I had learned something from her and that she had absorbed my feedback and would let it brew for future events.

My takeaway and first impression from meeting Martha Coakley is that she’s a woman of her word — someone who researches the facts, opinions, and options; chooses a course; and sticks with it. For some, that methodical strategy may seem slow, but for me, it seems wise. I look forward to seeing what conclusions Coakley lands upon.