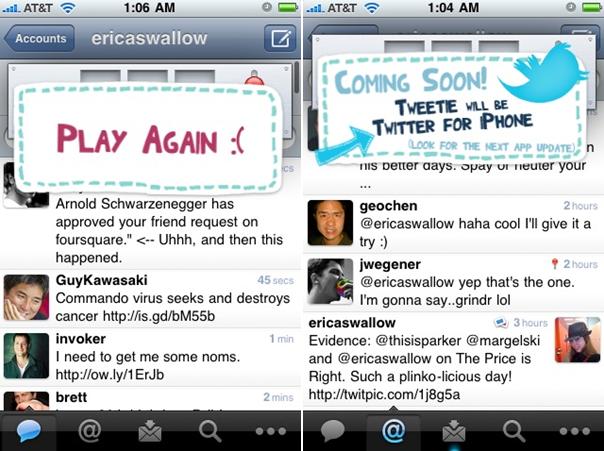 A recent update for the Tweetie 2 iPhone app teased that “Twitter for iPhone” is coming soon. Just last month, Twitter bought Atebits, the company behind Tweetie. Twitter CEO Evan Williams promised that Tweetie would not disappear, but that it would become the official Twitter client and be renamed Twitter for iPhone.

Well, folks, it looks like we’re one update away from seeing the app as “Twitter for iPhone”. Above are two screenshots from the slot machine game that appeared in the recent app update (2.1.2). After the lever was pulled and the three wheels stopped, the first message was “Play again :(“. The second lever pull locked in the correct code (every time) and read: “Tweetie will be Twitter for iPhone (look for the next app update)”.

If you have Tweetie ($2.99), go try it for yourself. If not, wait until the free version comes out!

P.S. Foursquare also tweeted, “The latest Tweetie-to-foursquare integration on iPhone is tighter than ever before. Get the latest Tweetie update when you get a chance!” Good to know! Thanks!