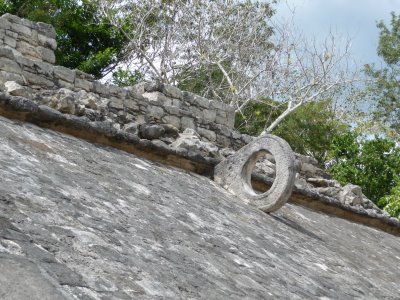 If you venture to Cancun, Mexico in the near future, I highly recommend stopping by Cobá, Mexico, a large ruined city from Pre-Columbian Mayan civilization. While there, you’ll see multiple ruins, including my personal favorites — the Pok Ta Pok ball courts.

Cobá is the largest Mayan excavation site, extending over 80 km². Its main pyramid is the Nohoch Mul pyramid, as pictured below. At 138 feet tall, it’s the tallest pyramid in the Yucatan peninsula.

But back to Pok Ta Pok! The sport, as described to us by our tour guide (who called himself the Mayan George Clooney), was an ancient Mayan game that resembled basketball. Each team of seven players attempted to keep a ball off the ground using only their hips, knees, heads and elbows. The object was to get the ball over to a captain who was running along the sideline wall’s ledge (about 4-feet above the field). The captain then used a kind of stick to hit the ball through a stone ring located in the top-center of the stone wall on their team’s side. Interestingly, the ball weighed up to 9 pounds and was made from natural rubber and covered in animal hides. 9 pounds… That’s pretty crazy, considering that the average Mayan man was 5’2″ tall! But I guess what they lacked in height, they made up for in strength.

While in Cancun, I saw a street sign marked “Pok Ta Pok” and a golf course named Pok Ta Pok. So, I guess the game lives on!