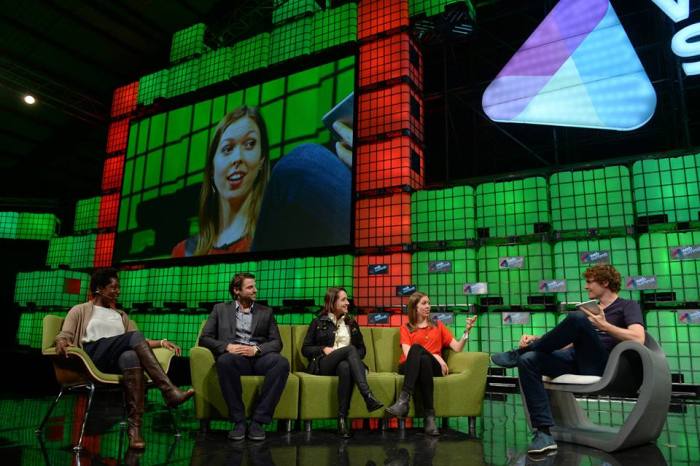 Representing the Sloan School of Management, I spoke on a panel alongside fellow MBAs during the 2014 Web Summit in Dublin.

On a typical Wednesday, I only have two standing appointments: a marketing class and a comparative literature class focused on leadership stories and ethics. The rest of the day is filled with group meetings, homework, a visiting speaker session every now and then, and of course, sleeping in, thanks to my afternoon classes.

This past Wednesday, though, was everything but typical. I had been invited to the Web Summit in Dublin, Ireland as an MBA Scholar to shed my experience and wisdom on a crowd of 5,000 soon-to-be university graduates.

My morning shower was the tip of the oddities iceberg that day. I had rented a room via Airbnb, a peer-to-peer apartment rental site, and my host, it turns out, was one of 250 Airbnb employees based in the Dublin office. I had grown accustomed to her being gone by the time I woke up, and that was true that morning when I pitter-pattered on the cold, hardwood floor to the bathroom. Seconds after I undressed and turned on the shower faucet, though, I heard the front door open and her voice on the other side of the door saying, “Erica? Hello?” Confused, I answered back, and she told me the plumber was in to fix the water heater — for the past two days I had taken cold showers, assuming it was normal.

That morning, I learned about my host’s mysterious water system. The plumber told me that the water heats up from 4–8 a.m., and in the case of a later shower, I could use the magical “boost” knob to heat a small batch of water. Since it was my big day to hit the stage, I decided to go all out and boost it up! It turns out a boost really is exactly what it sounds like — just a wee bit warmer. As the Irish might say, a little nudge up the hill; a bump, a push, nothing more. But I was ecstatic to have a lukewarm shower to start the day off in what felt like near luxury.

By this time back in Cambridge, I’d be running to my first event or meeting, struggling to get my coat on, all while texting someone that I was running late. My time in Ireland, though, was refreshingly on-schedule. I arrived at conference panels on time; I showed up to dinners early; and I always seemed to find a taxi quickly, as I was traveling off-peak. So, I did just that — called a cab using Hailo, an Uber and Lyft competitor that’s popular in Europe — and zipped off to the Web Summit.

A panel, a speech, a fireside chat. Lunch. Two more panels. I took it all in, typing out nuggets of inspiration that flowed from the stage. As my speech time got closer, I began observing how speakers entered the stage, where they placed their hands, when they paused, whether they crossed their legs or not. At one point, I caught myself planning out my “body language strategy” for later that evening. Crossed legs, I determined, looked more relaxed. Hands in lap seemed nervous. Arm over couch arm, calm and collected. And lastly, facial features. If my face was going to be blown up 10 times its size, I was going to take this big screen opportunity to play up my facial features and keep the audience entertained.

It wasn’t until I was standing backstage with a pop star-style microphone wrapping from ear to ear that I realized I hadn’t spent any time preparing for the panel content. Granted, it was about my MBA experience at MIT, so it wasn’t really a topic that demanded much preparation.

The stage manager signaled for the other panelists — also MBAs, from Harvard and HEC Montréal — and I to head up the backstage stairs towards the fancy sliding door that I had seen reveal speaker after speaker in the previous days.

The door slid open and lights flooded the opening; 10,000 eyes watched us move across the stage, and the first thing I thought to do was wave. And second? “Snap a picture, you fool!” I reminded myself. “There are 5,000 IRL people looking at you! How often does that happen?”

Souvenir shot taken, the panel began and the stage countdown clock started. We shared our backgrounds, why we decided to pursue an MBA, and how we were enjoying Ireland.

I was the last to speak on the panel, with 30 seconds left on the clock. Moderator and Web Summit founder Paddy Cosgrave had asked us to give our final bits of advice. “Don’t do your homework,” I said, getting a few chuckles from the audience. “Back in college, the most life-changing moments for me turned out to be studying abroad, learning a new language, going to art galleries and shows, traveling. Whatever you do, don’t spend too much time worrying about homework, because you’ll discover your true passions and make your best friends outside of class.”

With that, it was all over. Five thousand of Ireland’s future leaders had hopefully soaked in our words. It’s cheesy, but I hope I become one of those fabled inspirations for at least one person in the audience. A decade from now, one of them might be on a similar stage as the one I sat on, responding to a well-worded question on leading a passionate life, saying “I went to a panel when I was in college, and this MBA student from MIT said something that will always stick with me…”

After all, the only reason I find myself on stage after stage — though not typically as large as this one! — is because I was inspired by those who came before me.